HOSTED BY THE ECCBC
Since 1990, the organization has taken particular pride
in hosting many performing arts groups in Eunice:

ORGANIZATIONAL FACTS
Idea presented to the Eunice City Council on March 13, 1990.
First official donation to the organization by Councilman Kenneth Peart.
First Rehearsals were in April, 1990.
Premier Concert July 26, 1990, Liberty Center. The premier concert was a program of patriotic music dedicated
to the veterans of our nation's armed forces. The concert was sold out and marked the beginning of a
very successful existence.
FUNDING    Private donations, program advertisements, ticket sales, and grants. There are no membership dues and the organization is operated strictly by volunteers and pays no salaries.
JOINING    The organization is open to anyone in high school or older who enjoys and appreciates vocal and
instrumental music. There are NO auditions and NO membership dues.RELIGION The organization is non-denominational. Although some choir rehearsals and occasional performances are held in churches, the ECCBC is not formally associated with any particular religion, denomination, or local church. The membership roll is very ecumenical as there are many different denominations represented. 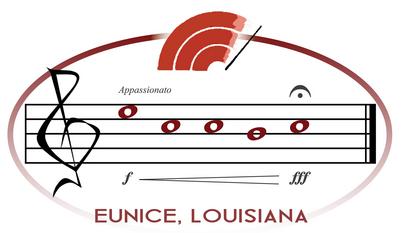 OUR LOGO
In 1992, the ECCBC commissioned the University of Louisiana at Lafayette (USL at that time) Art Department to create a logo for the organization. After a meeting with Dwight Jodon, Pat Dossman and the department, approximately fifteen art students set about the task of designing an appropriate ensignia.
Several of the proposed designs centered around the organization's acronymn, ECCBC. However, the winning design was a simple graphic. It symbolizes the semicircle staging used by musical ensembles globally. The image is one in motion as the conductor's baton sweeps across the design. This particular logo was selected because of its simplicity and because the ECCBC is determined to move forward into the future with the mission of sharing the gift of music with the residents of Acadiana.
It is our desire that this logo would be recognized as...a mark of excellence!

Informational Brochure (pdf)
The Eunice Community Concert Band & Choir, Inc. was organized in February of 1990 with the intent to promote vocal and instrumental music in Eunice and the surrounding area. The organization is open to anyone who enjoys and appreciates vocal and instrumental music. There are no auditions or dues. We depend solely upon the contributions of merchants and individuals and present two concerts each year, July and December. The organization is operated by volunteers and pays no salaries.

Several members of the community choir participated in a concert at Carnegie Hall in New York City in 1994. Joining singers from across the country, the group was directed by Dr. James Haygood and world-renowned choral conductor John Rutter.

The ECCBC has enjoyed much success since 1990.  Membership in the organization has grown to over 150. For any given concert there may be as few as forty or as many as eighty of those members performing on stage. For many, the rehearsal season provides a wholesome social activity and an
opportunity to meet new friends.

The organization adds to the uniqueness of this city. Very few American cities the size of Eunice have a musical organization such as the ECCBC. We are proud of all that we have done and look forward to serving the Eunice area with quality, family programs for many years to come.